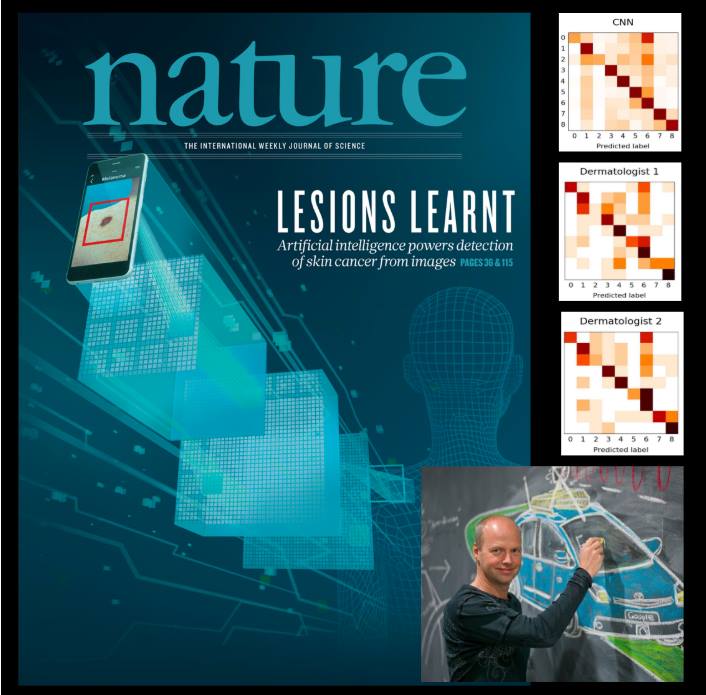 Taking the ability of the world’s greatest experts, and giving it to all, could save lives

Over a year ago, artificial intelligence (AI) expert and entrepreneur Sebastian Thrun ran a deep learning project with students at Stanford University. Recently, the project results made their way to the cover of the prestigious Nature Magazine.

German-born Thrun, a Silicon valley entrepreneur and a senior Google executive, is currently heading one of the most ambitious autonomous flying Electrical Vehicle ventures:- Kitty Hawk.

Thrun, who also founded the e-learning platform Udacity, loves teaching. He still runs an AI lab at Stanford University. Every year, he takes his students through the wonders of AI, while addressing a challenge of a great importance: in 2017,  the challenge was the early detection of melanoma. As most Australians know, melanoma is an all-too-common, lethal cancer. If detected at stage zero, the five-year survival rate is 99-100 percent. At stage four, survival rates drop to 15-20 percent. Even those who do survive can lose organs, and experience painful suffering.

It takes 10 years for medical doctors to qualify as specialised dermatologists. A dermatologist should be able to estimate the risk of skin cancer by an initial, careful observation of skin lesions. Suspected lesions are subject to an unpleasant, costly biopsy. Naturally, some unrequired biopsies are conducted, and some lesions left unsuspected can later develop into cancer. It goes without saying that the experience and detection skills of a dermatologist are priceless.

Thrun and his students worked on a dedicated image classifier model for melanoma. The model has been trained on hundreds of thousands of skin lesions that have already been classified by dermatologists—from benign to  advanced stage melanomas—but most are not malignant. There are over 700 known types of skin lesions, most of which are not dangerous. The students collected enough images of medically diagnosed lesions, at the scale of ~1000 images per type skin lesion. Most of their work was spent in arranging this image dataset. Building the model itself was not as complicated; it was more a creative task than one that required advanced programming or mathematical skill. Such models are built as an Artificial Neural Network (ANN), an efficient software architecture that imitates human, biological neural structure.

In this case, an ANN of a certain type (CNN  – Convolutional Neural Network) has been proven most efficient. The CNN model contained several layers, each inspecting unique details such as shape and colour of a lesion. The model tries to guess the type of lesion, one thousand times each hour. When it fails, it repeats the training and refines the sensitivity until better detection is achieved.

The model created by Thrun and his students has not achieved 100 percent precision in early detection of melanoma by visual observation only. The reason it made the Nature Magazine cover is that, after months of trial and error training, the model achieved a better detection rate than ANY human dermatologist, even those with decades of experience, providing more accurate results than any expert it was pitted against.

The idea that machines can execute human actions better than we can is not new, but Thrun takes it one step further. He believes that AI can make each of us superhuman. It has never been easier or faster to develop machine models that can complete actions in seconds—actions that, in the past, have required time, experience and repetition by humans to master. Thrun believes it’s our duty to rethink the work of lawyers, truck drivers, accountants—any repetitive human action—and, in this way, to change the world.

A model such as the one developed by the students could enable everyone to have the eye of a world-leading dermatologist right on their smartphone. We could take the ability of the world’s greatest experts, and give it to all.

So, the solution for one of Australia’s soaring problems is almost in your pocket.