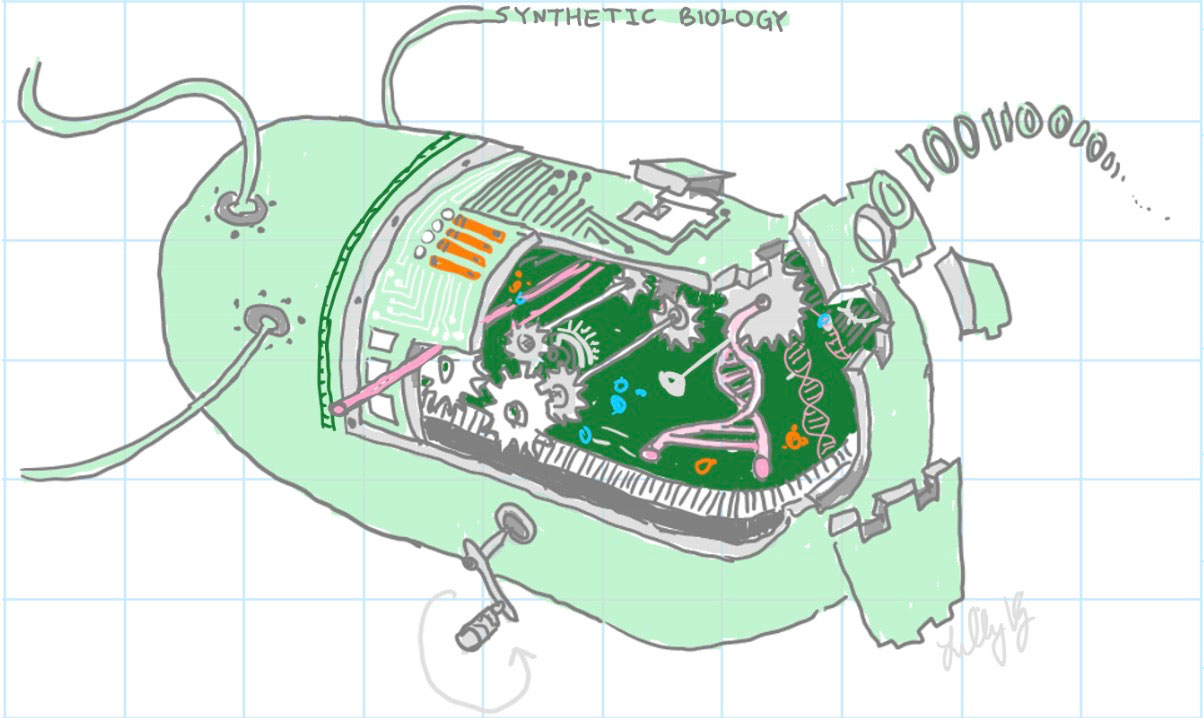 Scientists are working to edit the DNA coding of organisms to design and construct new biological systems, so what does this mean for the world as we know it?

Authored by: Ms Lilly Van Gilst
Andrew N. Liveris Academy for Innovation and Leadership at The University of Queensland, Brisbane.

Analogous to a computer, the cells that make up life here on earth can be thought of as a set of components, each with key functionalities. Membranes, ribosomes, mitochondria, enzymes—these work together to facilitate the purpose of the cell as a whole unit.

So, imagine editing the ‘code’ that determines how these components interact with each other. A cell’s DNA carries the genetic instructions for development, functioning, growth and reproduction. By employing the latest gene-editing tools, as well as new techniques to digitally model genetic

elements, scientists can recode cells to produce new or improved organisms[1]. This can be in the form of cutting and pasting DNA segments, such as with CRISPR[2] gene editing technology, or going a step further and creating functioning composite materials, whereby natural components are combined with completely engineered ones[3].

Writing new programs for cells doesn’t just sound cool, it has endless applications that can make our world a greener, healthier and more efficient place.

Today’s best malaria drugs use the key ingredient artemisinin, which was isolated and synthesized for commercial use by Jay Keasling and his team during 2001 to 2008[4]. Via meticulous tinkering with the controls of yeast genes, Keasling was able to produce a more cost effective and reliable source of artemisinin.

For mosquitoes carrying dengue fever, scientists were able to tweak the genes of the disease spreader itself! By transferring genes from the human immune system, an antibody can be activated within the mosquito to cure it of the disease before it can transmit further. Synthetically engineering gene drivers are the next step forward. These could be put into place to skew normal inheritance patterns and spread a genetic element such as the dengue immunity through the generations more rapidly1.

Synthetic biology is already being applied with attempts to detect and cure cancer[5], to use bacteria to produce working electronic circuit boards3, to create jellyfish that can clean up toxic spills[6] and to use microbes to sense arsenic concentrations at WHO’s drinking water standards[7]. In the future, the possibilities are endless.

If all this sounds a little too good to be true, let’s consider the implications of such technologies. As scientists work to make the gene altering process more efficient, it will no longer take Nobel Prize winning minds like Keasling to engineer these synthetic organisms. Where his work with just one compound took years to perfect, the rise of advanced technologies to model genetics may not only make this process quicker and simpler, but even allow variations of DNA code to be stored digitally.

Consider a future virologist who, in order to advance scientific understanding, develops a genetically altered bug as deadly as ebola and as contagious as chicken pox. In the wrong hands, a file containing the bug’s genome could mean a global pandemic that wipes out humanity as we know it.

Beyond the hypothetical challenges that can be dreamed up, is it even ethical to be editing the course of nature? The ability to experiment in the grey area between organism and machine may progress to severely challenge the dichotomy of the living and non-living in ways that we haven’t seen before. What challenges could such tampering cause, and will humanity have the tools to react if issues manifest further along the line? Because as much as biological systems can be compared to their computational relatives, there is no undo command for the mistakes we might make!

Synbio is an amazing progression of human knowledge that brings us closer to solving some of the world’s most prevalent issues. There is no telling how far synthetic biology could go to change the face of this world, and like any emerging scientific development, it is imperative to weigh benefits against the potential dangers it may hold when pursuing research in this field.